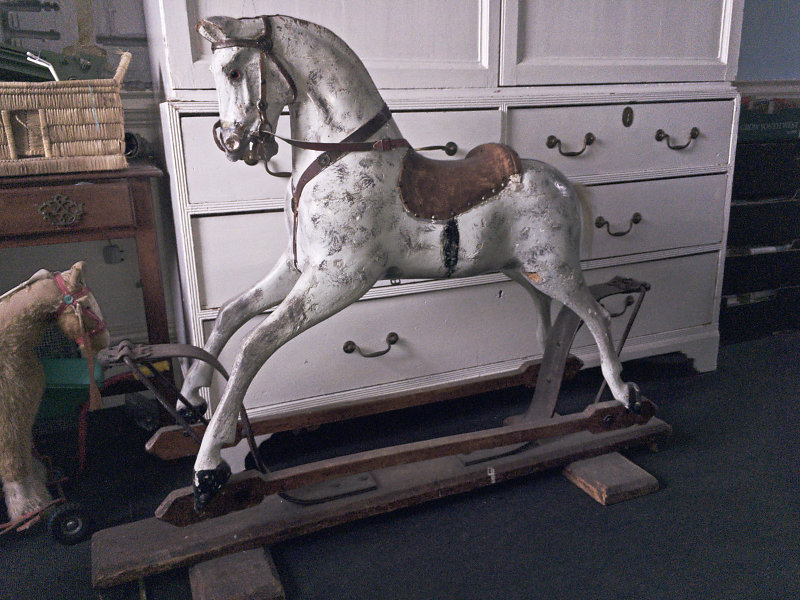 Three flights up sits a rocking horse. Dented by years of use and bald now after an unprovoked act of vandalism. Never the less the mechanics are in full working order. It has been friend to many a generation. It has also witnessed many tantrums, countless family arguments and much underage smoking and drinking. It was brought in a time when a nursery was a hive of activity in a large country house. A rocking horse being as necessary as table and chairs. A nursery that was ruled by a Nanny, who was in the true tradition of the breed, strict but fair. It was the glimmering play station of its time. Brought to amuse, to mimic what was going on outside. My earliest memory of the rocking horse was as a five year old. My brothers had flown the nest or were away at boarding school. My parents had gone rogue and dispense with the services of a nanny after the long serving one had passed away and now I was the ruler of the third floor. It was December. Days had grown short. Darkness fell at 3.30, bringing a grey and cold day to a close. Once a week the house was full of people. There was a pheasant shoot and with it brought friends and strangers to play with. As the grow ups were discussing the day and moving swiftly from consuming tea to whiskey, I used to led a gang up stairs to the nursery, to the rocking horse. Manners taught me to let my guests go first but it wasn’t easy. Some of my parent’s friend’s offspring would bring out the prima donna in me. It was my house, my rocking horse. I would show them how to get the best out the raging stallion. As I jumped up onto its back and grabbed the rains I imagined that I was a jockey in the final states of a race. Kicking it to go faster, Come on, Come on I yelled as I jumped the last fence and cruised to victory. Claps all round from the ecstatic crowd. Maybe someday I was just out for a leisurely hack. Taking in the scenery around me. There was a big green sofa where if you took off the cushions the leather became a slide, a cupboard full of games missing vital pieces, heavy and dark looking children’s books and a television. The television was rarely watched due to the fact that transmission didn’t start before 5pm and the presence of a snowstorm filter that that seem to come with all nursery tellies made it impossible. The original excitement of the horse died with growth. But it did not stop the imaginings. After consumption of many bottles of wine that had been liberated from the cellar, there I was, with a sneaky fag in mouth. A pissed up cowgirl riding into some strange town, not knowing who was your friend or foe. I was safe though as I had a trusty steed, which would whisk me, away if the heat got too much in the salon bar. Yeehay Hours of stories where told upon it. Mostly in holiday times when I was catching up with rarely seen relative’s lives. Realizing then it was in need of oil on the joints as it squeaked loudly as the stories got more animated. It was by then just functioning as piece of furniture but as nephews and nieces appeared and technology had not completely taken hold, I saw some similar times evolving. Well maybe not completely, I had been the perpetrator of the vandalism. The mane and tail had brought it after the supply of dolls hair had dried up and my dog got wise to the fact that I was a serial cutter.